Urban environment object CELEBRATION OF THE CENTURY OF LATS 2022 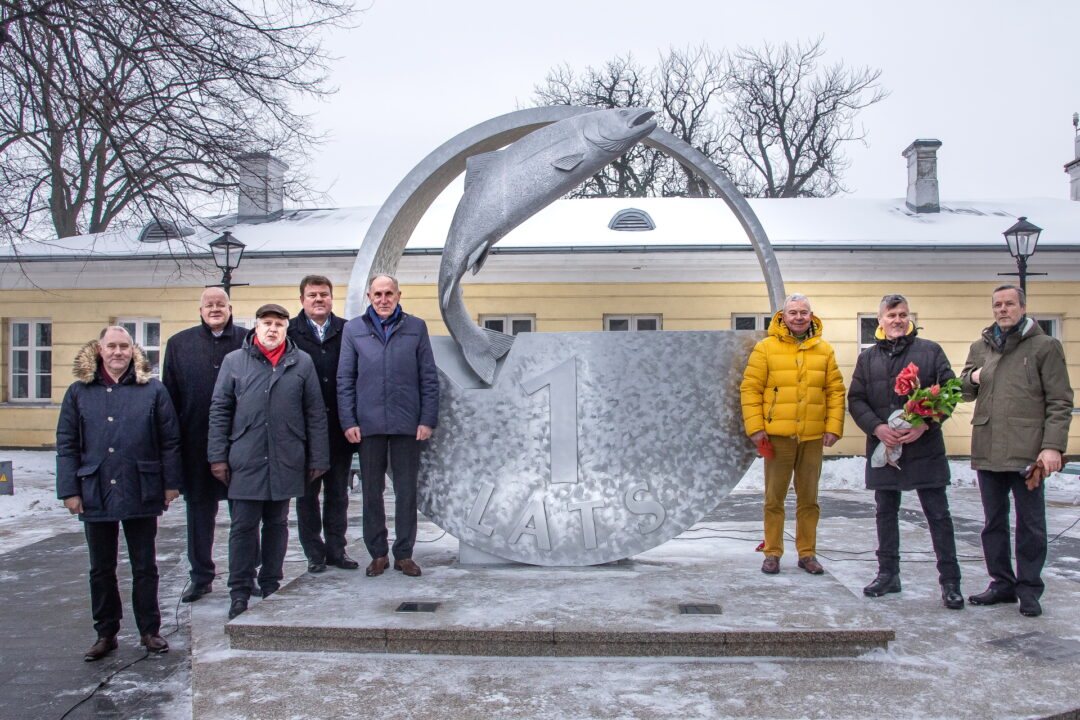 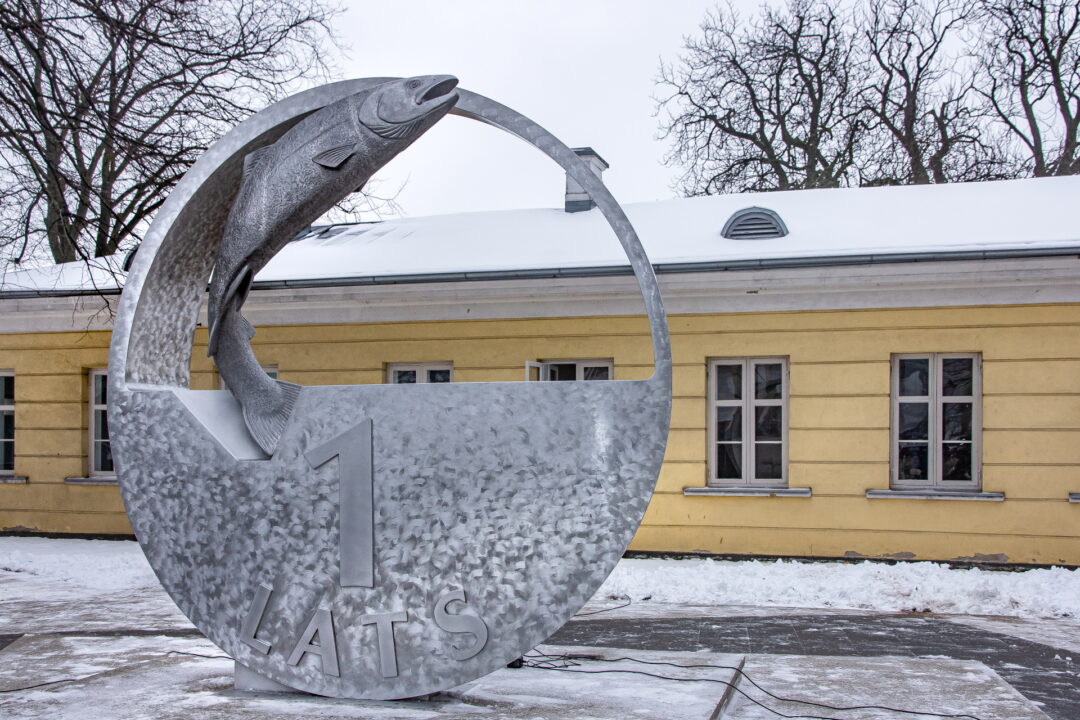 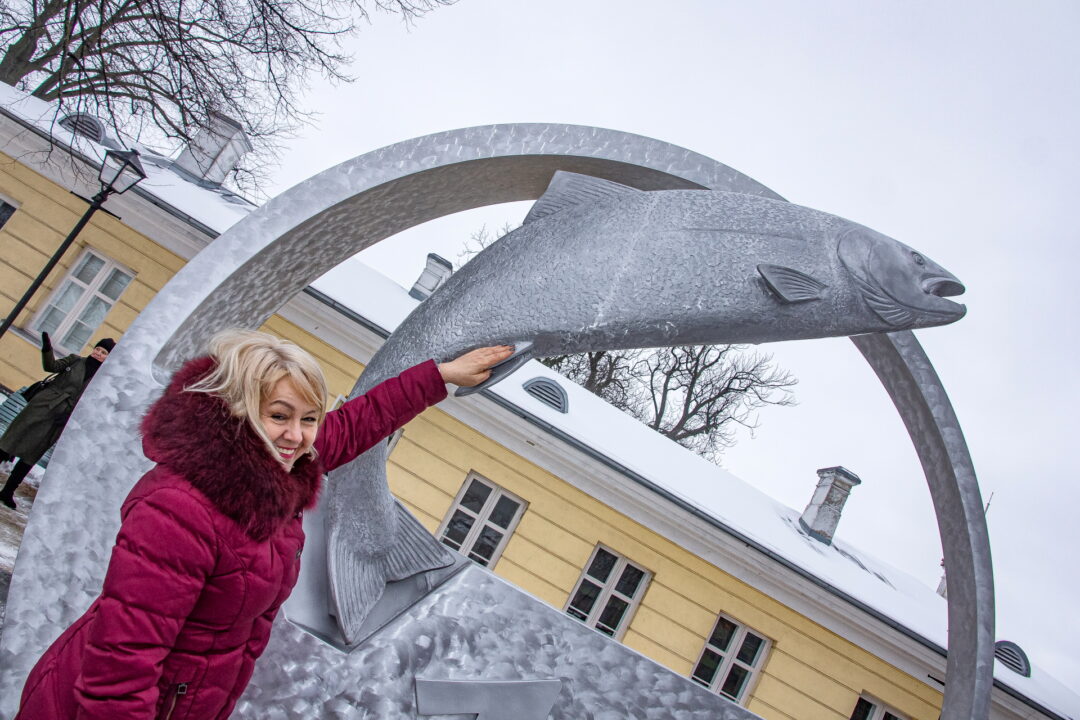 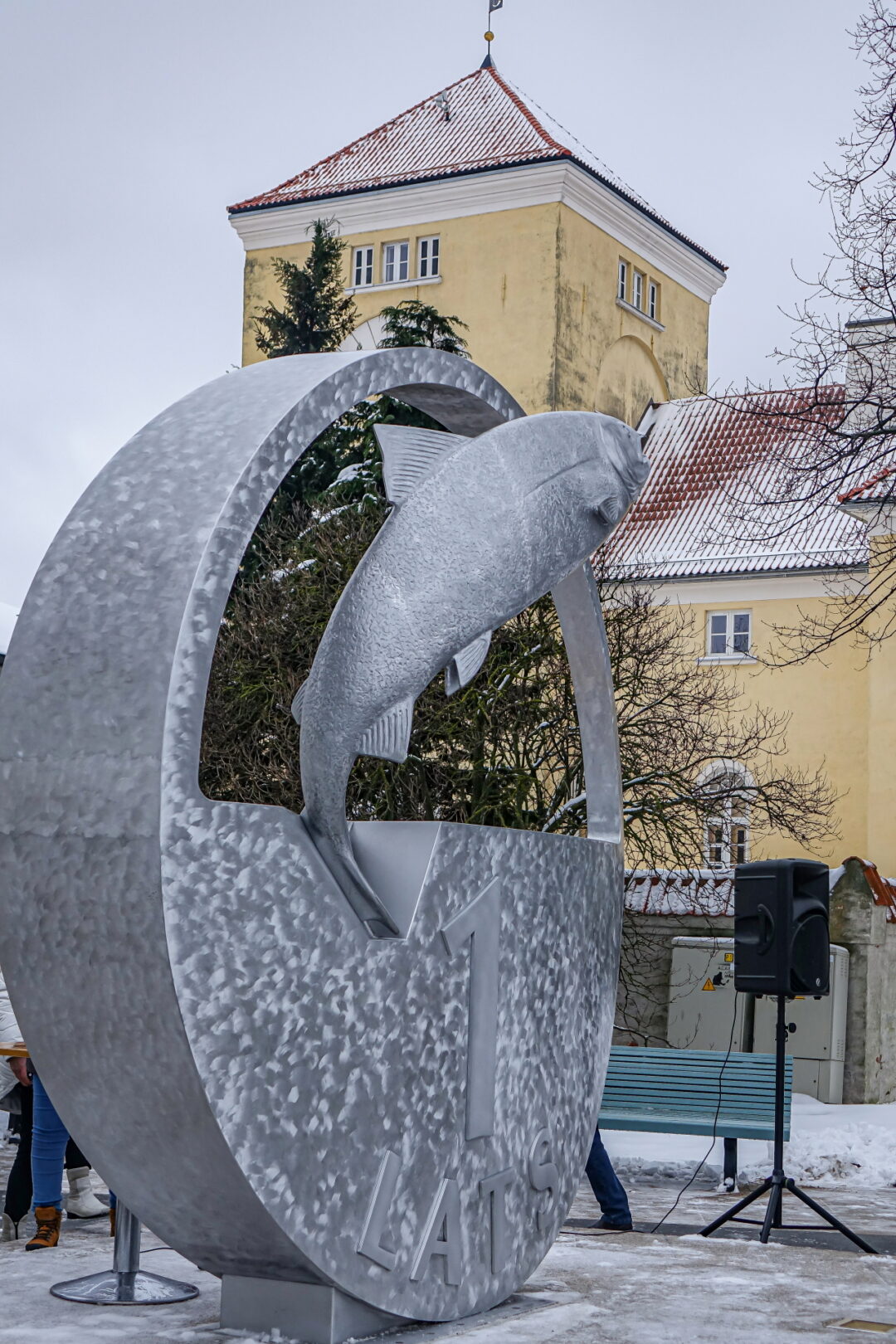 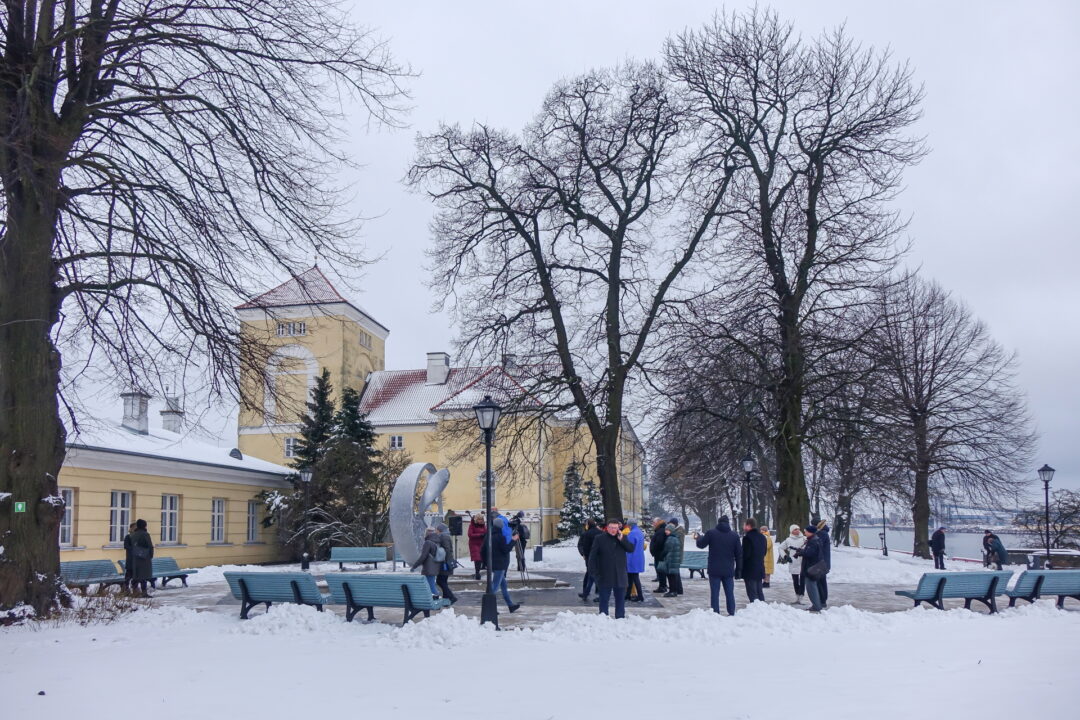 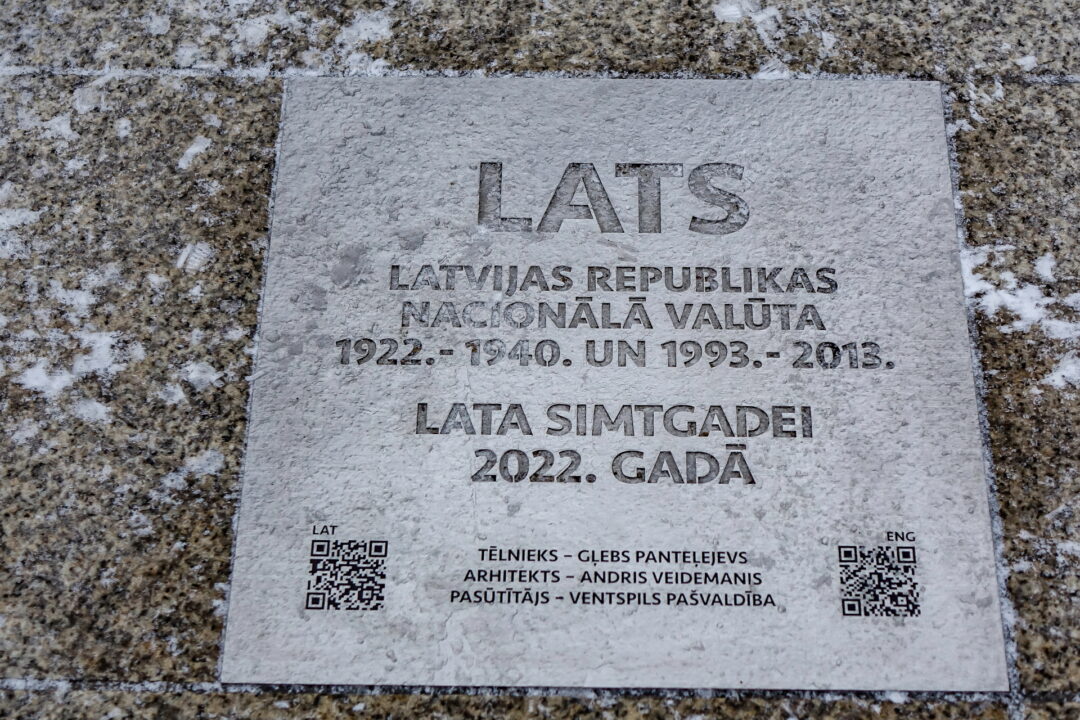 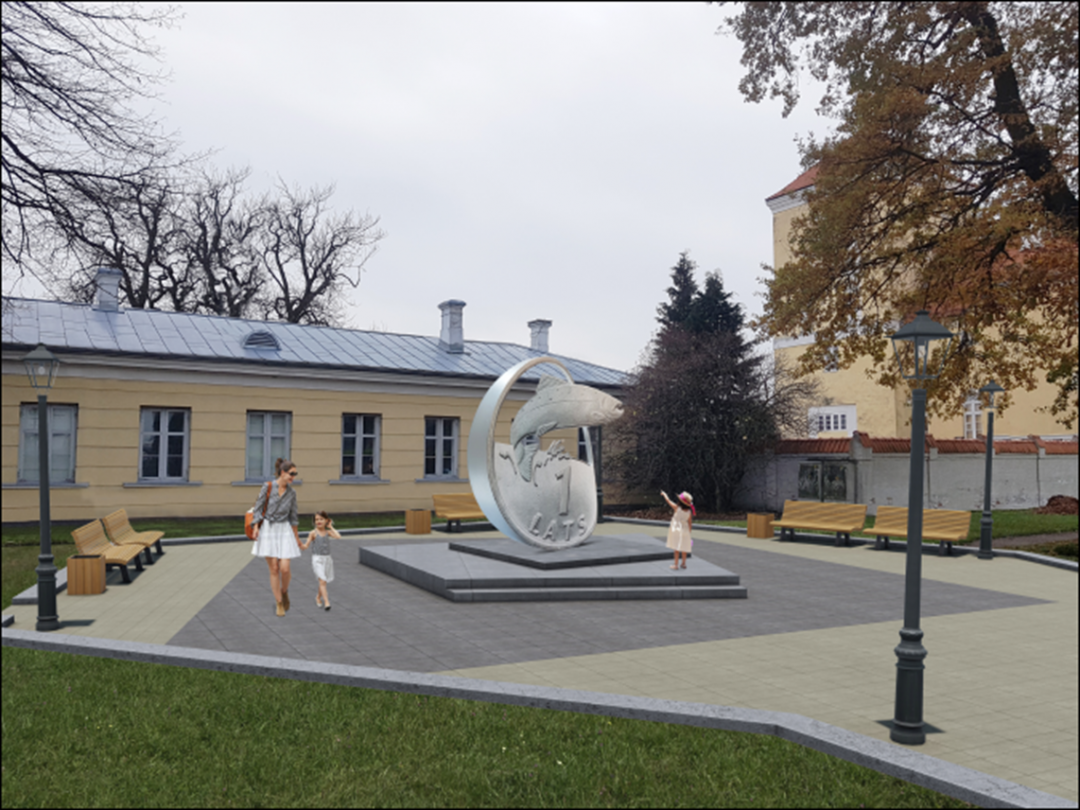 The urban environment object as a tribute to the Latvian national currency was created in 2022 – on the 100th anniversary of the introduction of lats, on Ventspils Hillfort beside the Livonian Order Castle. It reveals a view of the Ventspils Harbour where from 1925 to 1926, a part of the cargo of two-lats coins minted at the Royal Mint in the UK were unloaded, thus entering the territory of Latvia for the first time and through Ventspils, at that.

The urban environment object made from cast aluminium was created for the 100th anniversary of lats, based on the design of the one-lats coin of 1992, with a diameter of 3 m and active and varied silhouettes that change the configuration depending on the viewpoint. The image of the salmon is three dimensional and realistic.

To preserve the cultural and historic significance of the lats as a form of public piece of art, in 2021, the Ventspils City Municipality launched a design competition where out of 22 designs, the project “Evolution” by sculptor Gļebs Panteļejevs and architect Andris Veidemanis was announced as the winner. It represents their interpretation of the one-lats coin with the image of a salmon, which was the first coin that was introduced after Latvia regained its independence in 1993. The salmon symbolizes the readiness and maturity of the country to move on and the evolution of the economy, politics, and culture that allowed Latvia to join the European Union and to introduce the euro. The dynamic form of the urban environment object represents the evolution of this symbol which accompanied Latvia in every step of the way of its growth and the return of the wild salmon to fresh waters after completing its mission.

The Latvian lats as the national symbol of our country was created and “lived” in difficult times. The first phase of its existence lasted slightly more than 18 years. Created in 1922, it circulated as a means of payment in the independent country until the spring of 1941, surviving the independent Latvia during this time only a little time longer. 1993. the national currency was renewed, and it returned in form of new coins and bank notes. However, the second phase of the circulation of the national currency had the same fate as the first one, as the transition to euro in 2013 marked the end of this national symbol…

Urban environment object CELEBRATION OF THE CENTURY OF LATS 2022