Planetarium and Observatory of the Creative House

25
* Observations at the Observatory are only made in good weather. 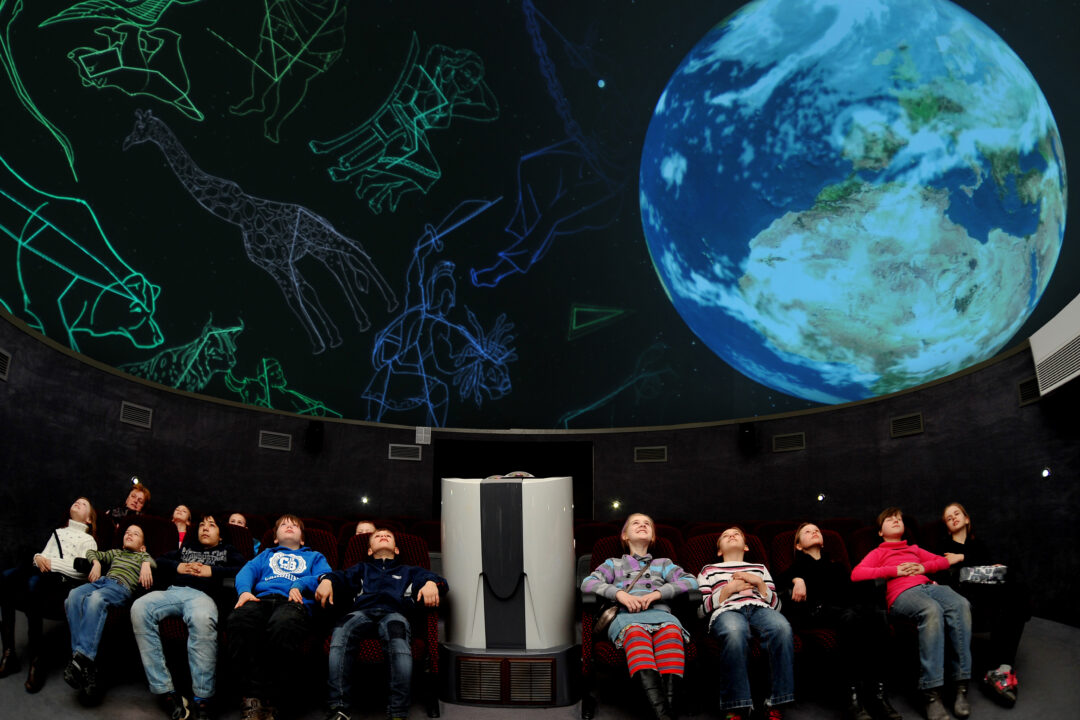 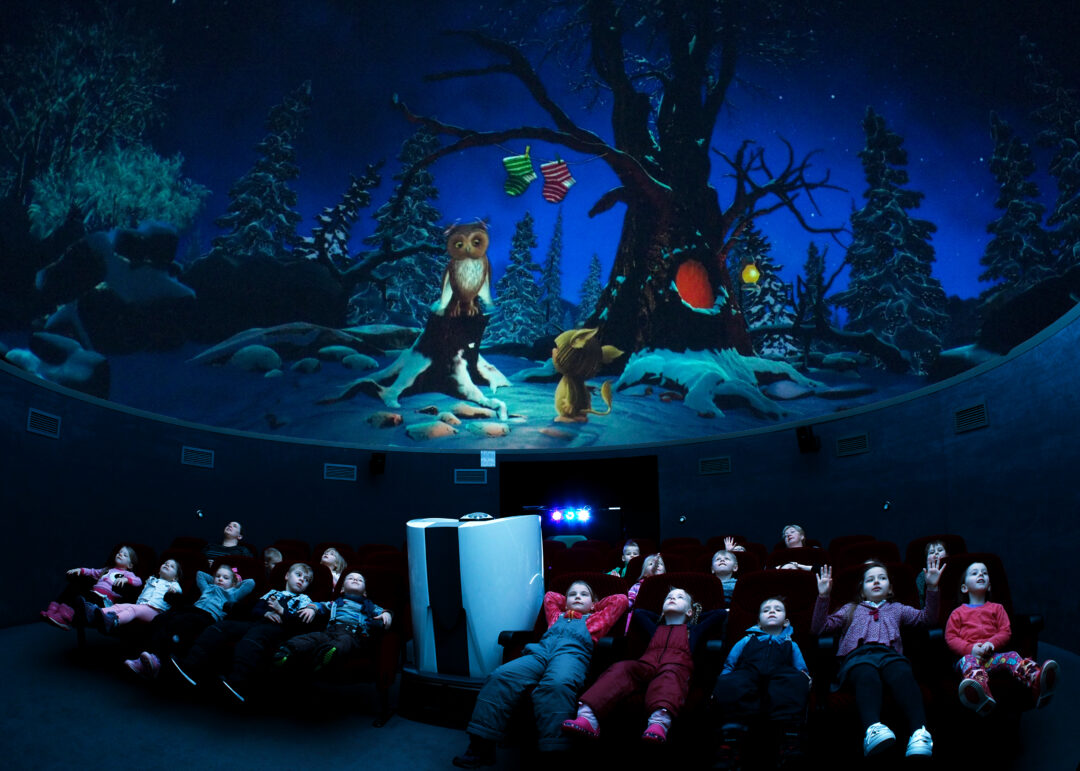 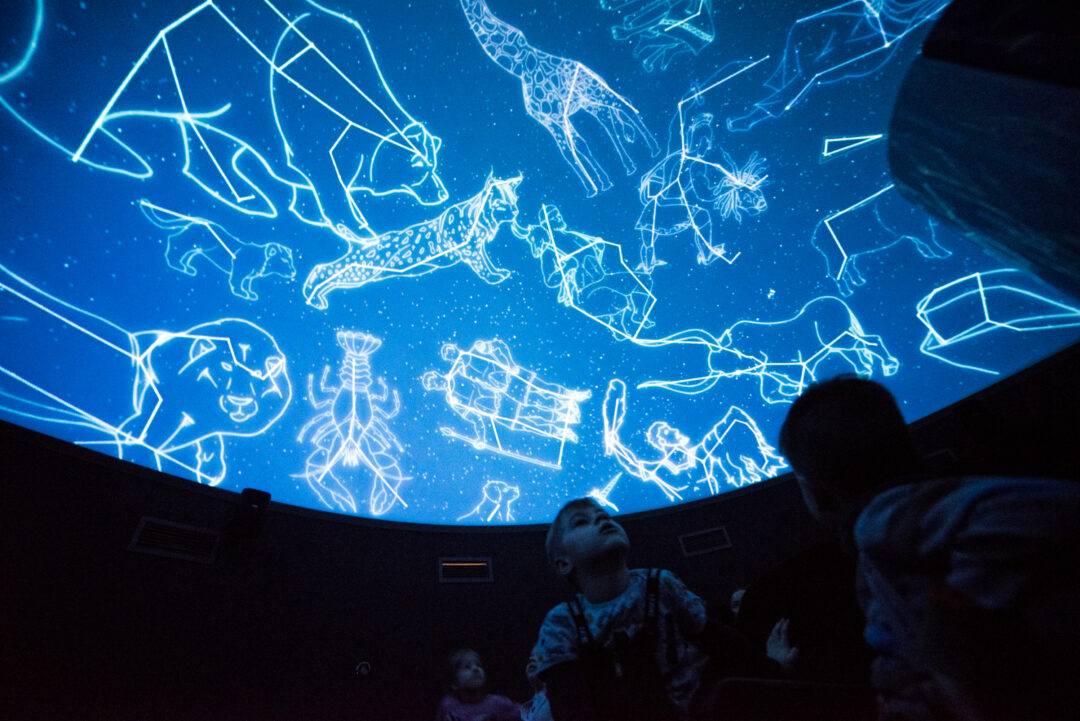 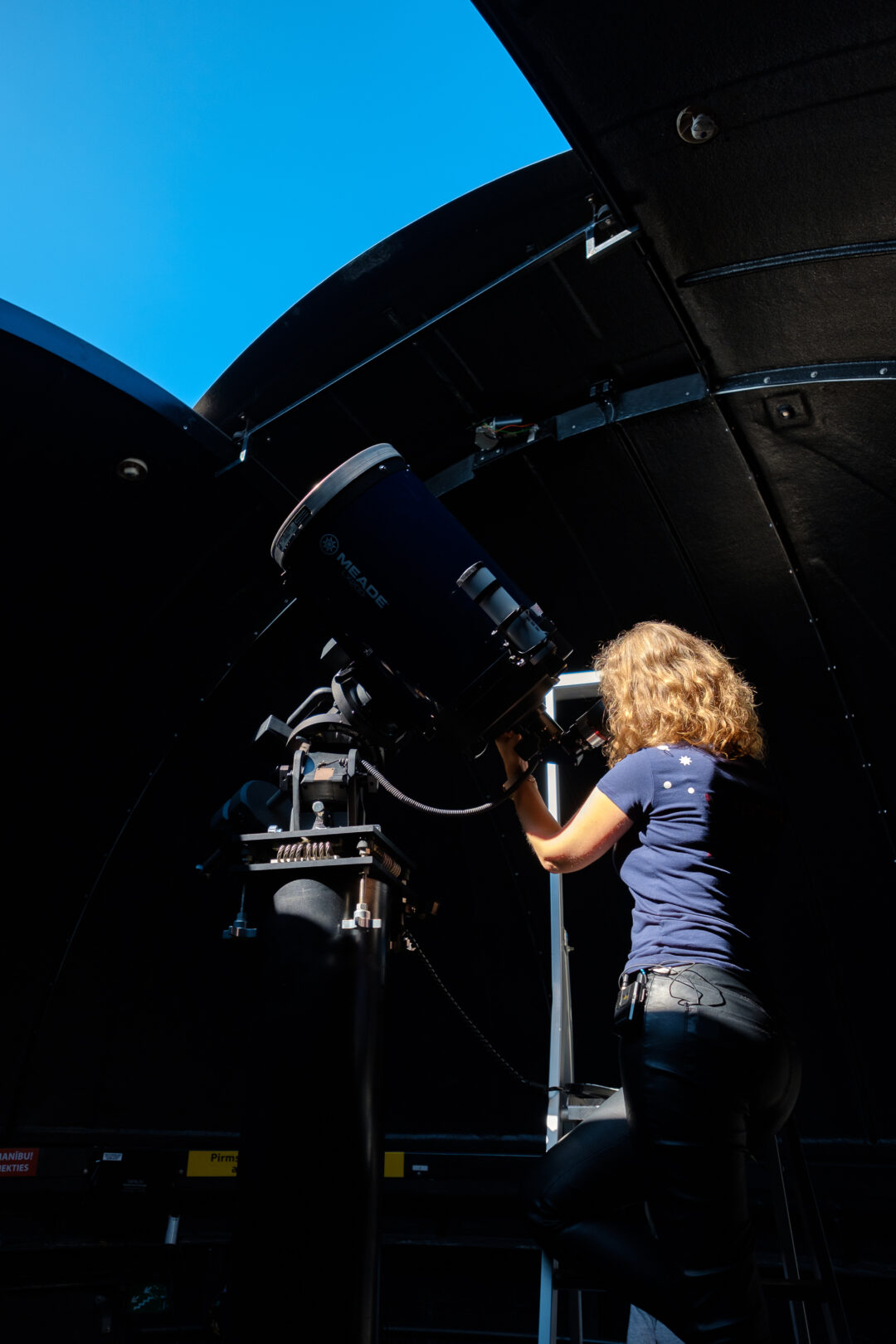 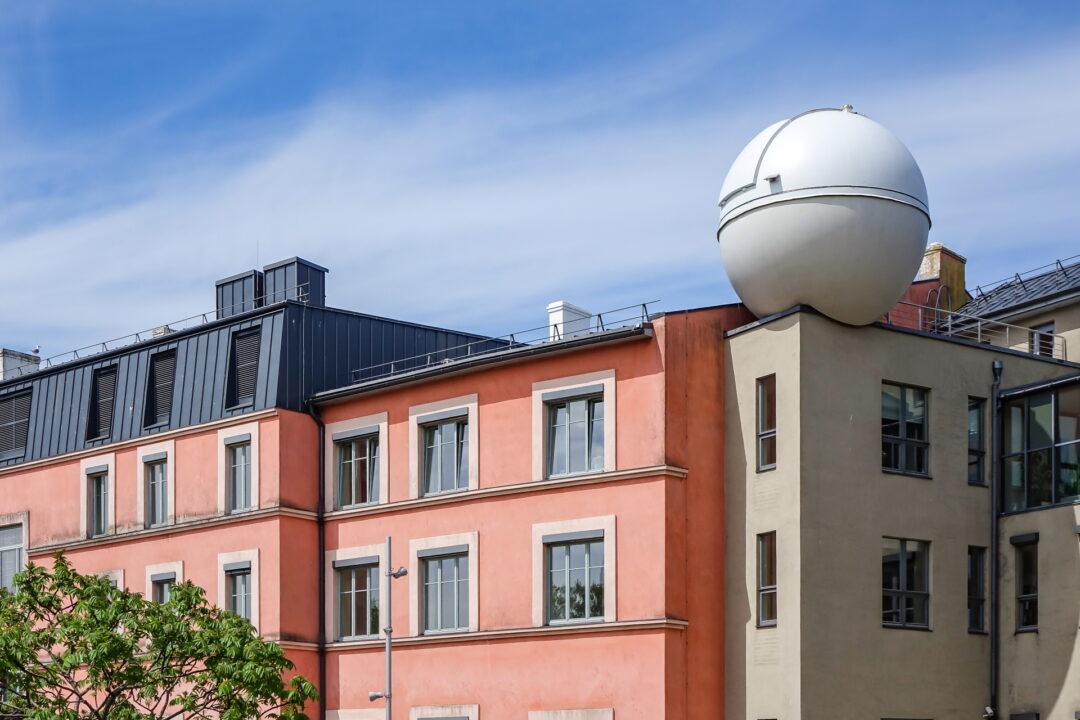 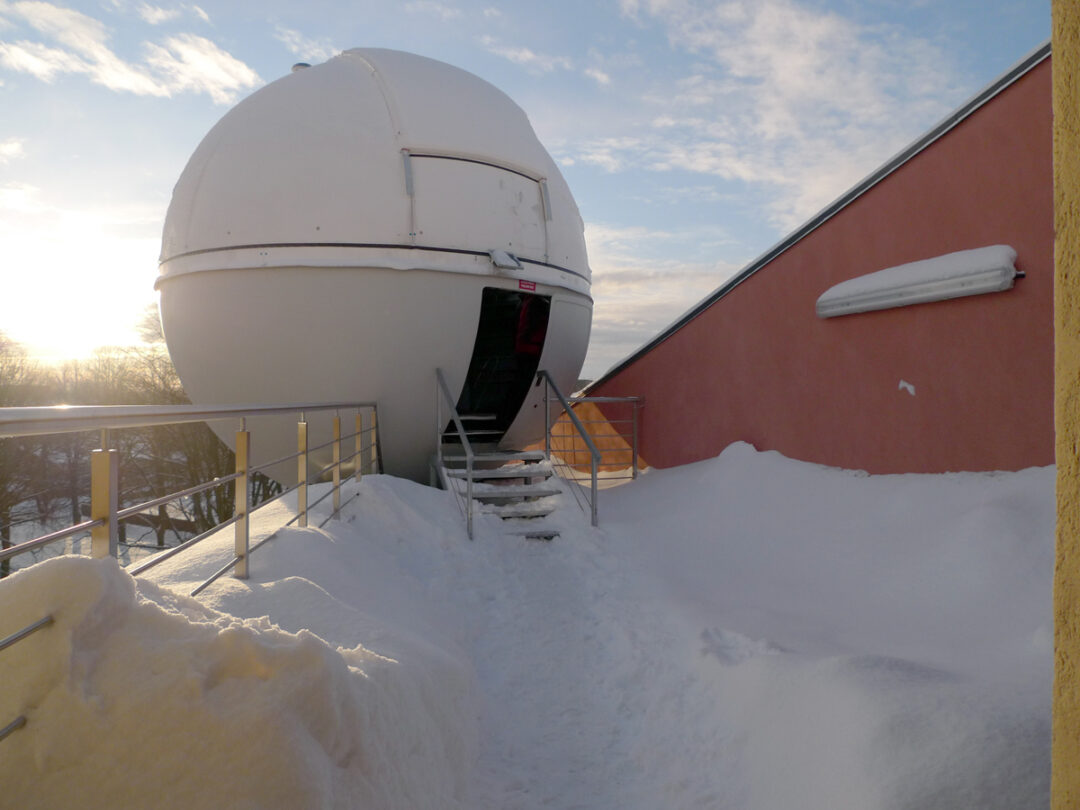 The Ventspils Creative House is a large complex aimed at carrying out extracurricular activities and programmes at city, national, regional and international level. 1912. The Ventspils Latvian Society House, built in 1912, has been reconstructed to meet the needs of today’s young people within the framework of the Creative House Development Project of the European Regional Development Fund. A planetarium and an observatory have additionally been created as part of the project to provide education of interest and as an attraction for visitors to the city.

The dome of the Planetarium is 8 metres in diameter and has seats for 40 visitors. A show in the planetarium lasts 35–45 minutes.

Equipped with a high-quality telescope, which allows to observe the Sun in daytime, and to observe the planets, Moon and stars in the evenings (from September to April). Observations are accompanied by lecturers’ talks.

* Observations at the Observatory are only made in good weather.

Groups can choose films and shows from the planetarium’s offer when booking the whole show.

Films are available in Latvian, English, Russian and Lithuanian. Audioguides in foreign languages must be booked before booking.

When organising field trips for pupils or pre-school children to the planetarium, you can choose the content of the show.

For pre-school and primary school pupils, the session consists of three parts:

Planetarium + observatory* + interactive session:
(Tuesdays, Wednesdays, Thursdays, Fridays)
2,50 EUR
(up to 2 hours depending on the topic and age group)

first part: getting to know the observatory;

second part: a cartoon explaining various natural phenomena and other science-related topics in a language children can understand;

For pre-school and primary school pupils:
Introduction to the Observatory* + “Khrumka’s Adventures in the Winter Forest” + “Seasons” interactive activity.
(During this session, children create their own picture of one or two seasons using game elements, discussing typical features of the seasons, deepening existing knowledge and learning new things.)

Introduction to the Observatory* + Film of the Planetarium + “Moon” interactive activity.

(During the session, children will learn interesting facts about the formation of the Moon, what the Moon is, its phases, the tides created by the Moon. Children will model the different phases of the moon and deepen their knowledge through games and contests.)

For secondary school students:
Educational lecture for general audience visualised on the planetarium dome + educational film or cartoon at option explaining various natural phenomena and other science-related issues in a language children can understand. (Repertoire may change over time).
http://jaunradesnams.lv/planetarijs/repertuars/

Lecture + film of the Planetarium:
1.50 EUR
(duration of the lesson approx. 1 hour)

Lecture topics:
“Sun”
Information about the Solar System from Mercury to Saturn. Key facts about the planets, major moons and the asteroid belt.

“Sky”
The difference between urban and rural skies, light pollution. The most popular constellations and constellations seen throughout the year. Orion Nebula and Andromeda Galaxy. A spectacular depiction of collision of the galaxies.

“Stars”
The movement of stars over thousands of years and changes in the appearance of constellations. What star showers really are and when to observe them. What is retrogradation. The beautiful Cat’s Eye Nebula and the interesting Saturn Nebula.

“Planets”
Satellites and their uses, the true shape of the Earth, encounters with asteroids, a trip to Jupiter and Saturn, the spectacular rings of Saturn, our galaxy in the Universe and the Ring Nebula.

Please arrive 15 minutes before the screening time.
1-2 teachers accompanying a group of pupils can attend free of charge.

Please book your sessions (at least 1 week) in advance.

25
* Observations at the Observatory are only made in good weather.
+371 371 63622805
planetarijs.observatorija@ventspils.lv
www.jaunradesnams.lv
Tue.
Wed.
Thu.
Fri.

Planetarium and Observatory of the Creative House